The chandelier of the Bone Church in Kutna Hora

Macabre art at the Sedlec OssuaryThe Bone Church in Kutna Hora, also known as the Sedlec Ossuary from the district of the same name, is something that leaves you speechless: decorated with the bones of over 40 000 human skeletons, it leaves you mixed feelings: it's the guilt of artistically enjoying dead bodies, something that it's usually seen only as pain and suffering, without being scared or disgusted. But actually this crypt is a really an enjoyable and extraordinary piece of macabre art, and quite easy to reach on a day trip from Prague, only 70 km far away by car or train. We were not planning to go there, actually we didn't even know the existence of this place, until some friends during our nomad travel told us about it.

The history of the Sedlec Ossuary

Some of the remains of the unearthed bodies

The history of the Sedlec Ossuary in a nutshell, is quite interesting. Where nowadays is the Bone Church, it was before a very coveted burial place, that filled up quickly during the 14th century because of the Black Plague first and the Hussite War after. When it was decided to build there a roman catholic church, over 40 000 skeletons had to be unburied, to be deposited later in the lower chapel of the Church, the Ossuary. After a century a half-blind monk was given the duty to organize the remains of the unearthed bodies, that he simply stacked one over the other in the crypt. The masterpiece took shape only after 1870, when Frantisek Rint , a local woodcarver was commissioned the reorganization of the chapel that he transformed in what is known nowadays as the Bone Church. The bones were used as a decoration, and only superimposed to the preexisting structure of the Church made of bricks and stone.

Decoration of the chandelier

The interior of the Bone Church

The most impressive piece of art is the central chandelier, that is said to be built with at least one piece of every bone present in the human body. Despite the Sedlec Ossuary probably owns it half of its fame, what is striking your attention while visiting are the details: garlands and crosses of skulls, angels and bones put together as if they always were, and a small bird that looks like is pecking a scared skeleton. The other element that is emerging is the light, creating nice contrasts and casting rays of light over the eccentric furnishings.

A calm Angel dominating a composition of skulls

Overall, the 3$ required to enter the Bone Church (student discounts and cumulative tickets also available) are definitely worth it, not to consider that there are other interesting landmarks to visit in Kutna Hora, like the Church of St Barbara, a beautiful UNESCO world heritage site. So you are warned, if you are planning to visit Prague don't miss a visit also to the Bone Church! And we found out that the Ossuary in Czech Republic is not the only one of this kind in the world: for sure we will not miss the opportunity to visit also the Bone Church in my hometown, Rome, called Santa Maria della Concezione dei Cappuccini or Capuchin Crypt. And we have another reason also to go to Portugal, and visit the “Capela dos Ossos” in Evora!

If you want to find out more details about the history of the Sedlec Ossuary, you can visit Wikipedia. 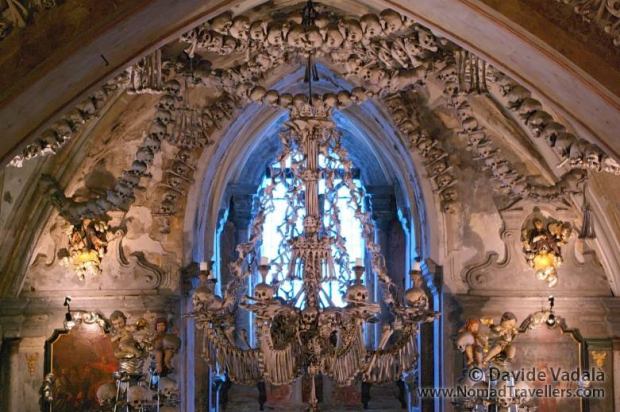 The vault with the chandelier and the garlands of skulls

General view of the Bone Church