The Capuchin Crypt: the bone church of Rome explained

The first chapel of the Capuchin Crypt

A bone chandelier in the Capuchin CryptThe Capuchin Crypt is a famous Bone Church in Rome, decorated with 3700 skeletons. It is situated in the less suitable area for an ossuary, the fancy Via Veneto street, made popular by the movie "La Dolce Vita", right below the church of "Santa Maria della Concezione dei Cappuccini".
After being in Kutna Hora (Czech Republic) last autumn, to visit the local bone church called the Sedlec Ossuary, we were so impressed that we decided to see also the Capuchin Crypt in my hometown, Rome. We just packed our day-packs and my photo equipment, we took our bicycles, and we challenged the crazy Roman roads until we reached the Capuchin Crypt.
The entrance ticket is 6€ and it is including not only the crypt but also the Capuchin Museum. You actually have to pass through the whole museum to reach the bone church that is at the end of the path. We couldn't wait to admire the ossuary, so we just went straight to the crypt, leaving the visit to the museum for later.

Crossed mummified arms, representing the Capuchin logoMore than a bone church the Capuchin Crypt is an ossuary, made of a corridor about 30 meters long (100 feet), connected with five chapels. Four of these are decorated with bones and skeletons while one, the forth, is not because there was celebrated the mass. Right after stepping inside the crypt I had a bad surprise: I started taking pictures when I heard a voice saying "No photos". No, it wasn't the ghost of a 500 years old Capuchin friar: at the end of the corridor an employee controlling the area was spreading his voice through the speakers scattered around the ossuary. I was very disappointed but at the end of the visit I went back to the entrance and saw that in fact at the ticket office there is a sign saying "no photos". At least I was able to take some shots to put in the article

A Capuchin mummy resting in his bed, before I was stopped, but that's definetely not what I was expecting.
Right after entering in the Capuchin Crypt, a child skeleton is welcoming you while holding a scale and a death sickle 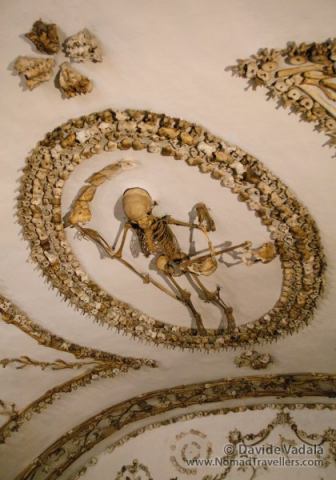 A child seleton at the entrance of the Capuchin Crypt in the vault of the first chapel. Each room is unique, with different bones used and arranged in creative ways, forming arches, garlands and chandeliers. There is a big use of skulls, stacked one over the other, forming scenographies with niches in which are inserted full skeletons wearing the Capuchin habit. This big display of skulls, pelvises, scapulae and vertebrae is not that scary, it looks like a pile of stones. But the creepiest part is the Capuchin logo in the central tabernacle of the second chapel, made of two crossed mummified arms.
In

Interior of the Capuchin Museum in Romesome of the rooms there is no floor, just soil where friars  that were recently dead were inhumed until they fully decomposed in 30 years and later used for decorating the Capuchin Crypt.
After visiting the ossuary, we went back all the way to see the Museum. It's bigger and more technological than we were expecting, with big touch screens and glossy windows: a contradiction compared to Capuchin poverty. Here are displayed memorabilia of famous monks and Saints, with panels explaining their history. Among the objects exposed, what caught my attention were some self-torture tools used by the friars to martyrize their flesh, and a confession counter

Confession Counter, maybe an ancient tool to keep track of the "working hours".

History and legends of the Capuchin Crypt

There is no official history of how this bone church developed over the centuries, because of too little written documentation. It is known that in 1631 Capuchin Monks moved from a nearby monastery to the new location where the ossuary is now situated, and brought with them 300 carts full of their belongings and of bones from the Capuchin cemetery. Bones kept collecting over the years (from 1528 to 1870), and a total of 3700 skeletons were used for the decoration of the bone church. The first written memories about these underground chapels decorated with bones, are from 1775, written by Marquis de Sade. He states that the bone

Capuchin skeleton in traditional habitdecorations were made by a German Priest, but other versions are contrasting with what he is saying. Another legend is narrating that in 1793 some Capuchins took refuge in the crypt after being persecuted in France, and secretly remained there. One of the refuged monks asked to arrange the bones in a artistic way while staying there, and that's how the Capuchin Crypt was created. Another legend slightly different is talking instead of a persecuted artist protected by the Capuchins in the crypt.

The Capuchin Crypt or the Sedlec Ossuary?

All in all, the visit to the Capuchin Crypt was definitely worth it. But comparing it with the bone church of Kutna Hora, the Sedlec Ossuary that we visited some months earlier, we weren't impressed and we found the latter to be more artistically developed and impressive than the Roman ossuary. Maybe because in Czech Republic it was our first visit of this kind, or maybe because there weren't annoying guards screaming "no photos"