Homestay in the Himalaya: an unforgettable birthday in Nepal

Family photo of my birthday celebration in Nepal 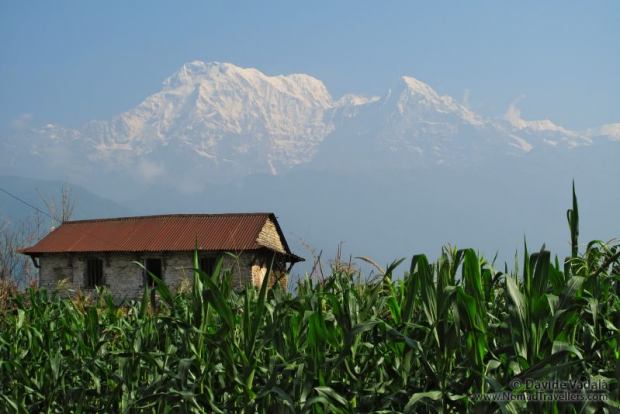 Corn fields in Dithal, with the Himalaya visible on the backgroundIf I think of the most surprising birthday I've ever had in my life, it was no doubt my 29th birthday celebrated while I was in the Himalaya in Nepal, in a homestay with a local family.

After trekking for three weeks the Annapurna Circuit and further away, I went back to my basecamp in Pokhara. After such an amazing experience in the nature, one of the most memorable of my life, I couldn't get used to "city life" anymore. That's how I remembered of a man that approached me a few days earlier on the lakeside of Pokhara. He asked me if I could have been interested in a homestay in a village (Dithal) in the Annapurna Area of the Nepali Himalaya, where his mum and sister were living. At the first moment I thought it was just o

Local woman sipping a tea in Nepalne of the many people trying to earn their daily life approaching, and maybe scamming, foreigners. But later I found out that he was actually spontaneous and sincere, he was running one of the many outdoor shops of the area and he had no real interest in earning money from the situation. As far as I can remember, he was asking for 7$ per day, local frugal food and accommodation included: it was more about keeping his mum entertained than having an economical advantage. We started a conversation, and I eventually made up my mind and after some time I went back to arrange my homestay in Dithal, eager to experience more of the Annapurna Area.

His teenage nephew was my guide for the occasion.

The teenage nephew, proudly pointing "his" valley He took me from Pokhara and brought me to their village, where I spent 4 memorable days (so little time if I think about it now!) in complete relax, following the farmers' rhythm of life, sharing my meals with them and getting involved in family business.
In the old, cozy cob house were living the Grandma (the mum of my "bait") with her daughter, and the two grandchildren, coming and going according to their school schedule. There was no father, so the woman had to take charge of all the work and the responsibility. Even if she wasn't fluent in English, she could communicate and she was eager to talk with me about her life.

The Nepali family and the Israeli mumI remember her as a very sweet but at the same time melancholic woman, a result of her tough life trying to give dignity and to maintain her family and her kids at school.
The case wanted that the third day of my homestay in the Nepali Himalaya, was coinciding with my 29th birthday. I was actually having no expectations, and I wasn't planning to do anything in particular; it turned out instead to be a memorable experience.

Dithal, Annapurna area: Kids having fun dancing and singing: it wasn't happening that often, it was an event for the whole family, and everybody was excited to wait for my answer. The deal was that I was supposed to buy a bag of oil (yes, it was packed in small plastic bags) since it was too expensive for them costing about 1$ per package. I clearly accepted, and with my decision it started for everybody the donut-bread party.

Some planets probably aligned despite my disbelief, since from that moment I attracted good events and nice people one after the other. A

Me eating a donut with the two russian hikers and the Israeli Dadn alternative family traveling from Israel, staying previously with them, were passing by with their two kids to say hello to the family, and they eventually joined the celebration. Then was the turn of kids, friends and neighbours from the surroundings. And the team was eventually completed when two Russian trekkers, guided by the bait-uncle from Pokhara, reached our place. The "family" increased so much that I had to run to buy an extra bag of oil. A small extra expense for a much bigger experience to remember.
The evening proceeded with the kids having fun in the

The grandmother lighting sigarette with a burning charcoalcourtyard, playing music and dancing, and us eating donuts and socializing in the interior. The grandmother was at the center of the attention, as a real keeper of the household. Nobody could say how old was she, but despite her deep wrinkles, she looked like she always had been there, firm, eternal, and secure. She was smoking a cigarette, jauntily lighted with a burning charcoal, as if even the toxic fumes she was inhaling, couldn't impact her eternity.

Eventually it was night and we had put an end to the donuts-bread party and to go and take some rest. The next morning after a communal breakfast, and a "family" picture,  it was already time to say goodbye to our guests and to go back to "our" village life.