Tanjung Puting National Park is probably the easiest and most accessible place in the world where to see the Orangutans in the wild. Tanjung Puting Taman Nasional is located in the Indonesian region of Central Kalimantan (actually in the Southern part of Borneo Island) and it's easily reached from Kumai and Pangkalan Bun, accessible by Ferry, Bus and Airplane.

Camp Leakey and the Bornean Orangutanmen

The Orangutans are living in the wild only in Borneo nowadays (Indonesian and Malaysian part, but not the Bruneian portion) and Sumatra. The subspecies present in Tanjung Puting National Park is called Bornean Orangutan ans is classified as endangered, slightly different than the Sumatran Orangutan, which is just a step from extinction and classified as critically endangered. The population of wild orangutans living in Tanjung Puting is estimated to be around 6.000, that make this National Park the place with the biggest population of Bornean Orangutans in the World.

The popularity of the park is due in particular to Camp Leakey, named after Dr. Louis Leakey, the paleontologist who mentored Dr. Birute Galdikas and his former wife Rod Brindamour Galdikas. They established the camp in 1971 to observe the behavior of Orangutans into the wild, devolving over 100.000 hours of observation to the task. This was the most impostant study ever done on Orangutans and its results are of extremely importance nowadays to help this endangered species to survive in the wild. Camp Leakey act also as a rehabilitation centre, where captive or orphaned orangutans are brought after rescue, to be reintroduced in the natural environment. Three feeding stations along the river make it extremely easy to see these primates at meal time; many of them are considered to be semi-wild, because they had a past of captivity and are now used to the presence of man. That's why it's so easy to spot the Bornean Orangutan in Tanjung Puting.

Tanjung Puting National Park (Tanjung Puting Taman Nasional in Indonesian) instead, was established only in 1982 from a previous game reserve, and it's divided into 3 zones: utilization, buffer and core zones.

Sequence of the agile aerial dance of a GibbonThe easiest and actually only real way to visit Tanjung Puting National Park is to access it by water, ascending the Sekonyer River. This can be best done by hiring a Klotok, a traditional fishermen boat with sleeping quarter that takes tourist in multi-day trips in the park.

For flash tourists or people with a limited budget, it's possible to try to share a speedboat and reach directly Camp Leaky to see the Bornean Orangutan at meal time in the last feeding station and be back in Kumai in the same day.

When we were in camp Leaky we saw a huge group of Indonesian tourists arriving, taking selfies, staying 20-30 minutes and then leaving all of a sudden: not the best way to enjoy Mother Nature gifts. Arriving with a speedboat still involve paying the rent for the boat, the guide and 1 day entrance fee to the park, a quite hefty 250.000 Rp per person per day for foreigners.

Very low budget backpackers, might want to consider visiting other National Parks in Kalimantan where it's possible to enter by feet with or without the help of a guide, but where seeing the Bornean Orangutan might be a question of hit or miss.

If you are a low budget traveller and still really determined to visit Tanjung Puting National Park, there might be another partial and not completely satisfying solution, suitable only for the hardcore shoe string nomads.

The access to the first feeding station in fact is exactly in front of the Harapan-Sekonyer village, on the other bank of the river. The village has some homestay options, and it is accessible overland, with private transportation, with scooter taxi (Ojek) or by feet if you are willing to walk long enough.

Once in the village it's just a matter of hitching a ride on a boat to the other side of the river: some friends of ours tried this technique but failed.

A man working on a fishing device in Sekonyer village

When choosing this option you should also consider that legally the entrance permit should still be paid for one day, and the use of a guide was made recently compulsory to visit the park.

It's also possible to rent a canoe in Sekonyer Village for a cheaper price, and explore the surroundings in tranquility, giving up on the following feeding stations. 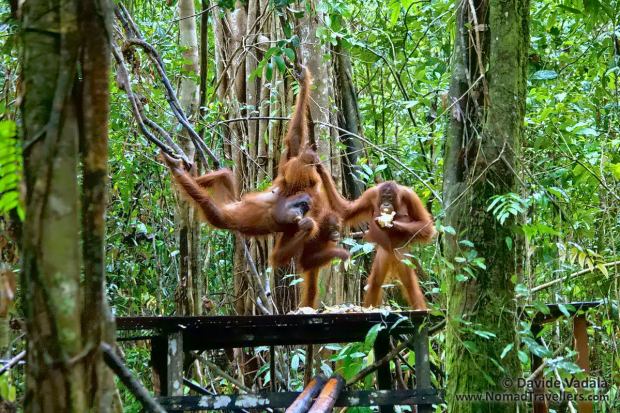 Orangutans eating at a feeding station in Tanjung Puting

While Tanjung Puting National Park is renowed for its population of Bornean Orangutans, there are also other easily spotted animals in the reserve, like Proboscis Monkeys, an endemic species from Borneo, Gibbons, Long Tail Macaque, Wild Boars and Squirrels, while the most fortunate might even see Hornbills, Crocodiles, Clouded Leopards and Civets.

While in a National Park, wildlife is still... wild! So pay attention and follow your guide, since several years ago a visitor was killed by a Crocodile while swimming in Camp Leakey.

A carnivorous Pitcher plant found all over Kalimantan

We were happy to see that unlike the other Indonesia rivers, Sekonyer River wasn't invaded with plastic garbage. There are still environmental concerns thought, connected with the rental of the boat: the noise of the engine and the passage of the boats are disturbing the wildlife, the oil is polluting the water and the emissions the air. Before deciding to take the tour, we meditated long time on our influence on this protected land.

Until better non pollutant technologies will be adopted to navigate the river (We wish some enlightned investors could do this as soon as possible), this is unfortunately the environmental price that one has to pay to visit the park.

At the same time we shouldn't forget that tourism is one of the main economic resources to raise funds through the entrance permits, that allow the Orangutan Foundation to continue its efforts of conservation of the Bornean Orangutans in Tanjung Puting National Park, making every new visitor, an extra income to invest into the protection of this amazing but endengered species.