Flights cause a lot of harmful emissions

One life = One flight. Yes, that' not a mistake, if the world would be a fair place, and everybody could use its resources sustainably and equally divided among its population, utopia that we are far away from reaching, we could fly only once in our whole life.
Unfortunately I couldn't locate the source of this affirmation, but what we know for sure is that of all the transportation options available, the airplane is the most pollutant mean at our disposal. Covering a distance by airplane is the worst choice, since it is polluting several times more than doing the same distance by train, ferry or even by car. The best choice for a long term traveller would be hitchhiking, cycling or walking, all accounting for almost 0 emissions on your conscience.

Oti walking in France next to a busy road
Effect of flight emissions: the 2.7 factor

And this is just about mere numbers, but not everybody knows that the effect of the emissions of the aircrafts should be multiplied several times (usually by 2.7), since they are emitted higher in the atmosphere, creating more harm to our planet.
That's why some years ago I decided to use as little as possible the airplane and I managed to travel overland for 954 days, before I got sick and had no choice than taking a flight to go back home.
According to Seat61 a website specialized on travels by train, covering the same route overland from London (UK) to Tangier (Morocco) by train and ferry instead of by plane would cause 85% less emissions; and this is still not taking into account the 2.7 factor, so the difference after multiplying it would be even more impressive.
Of course these are just numbers and statistics, not an objective truth, and need to be analyzed since the results depend on many factors, like distance, fuel type, efficiency, maintenance, weather, source and financier of the statistics, etc. But they can give a good idea of what's the reality, in particular when the difference is so accentuated that a small error or interpretation in not influencing too much.
Remember that airplanes consume much more fuel during take off: so very short haul flight are the worst since proportionally there is less distance to amortize the initial consumption, and take off can account to up to 25% of the total fuel consumption.

A train in North of Italy
To be sincere data are changing quite a lot according to the source, in example a long haul international trip by plane would emit the same amount of Co2 of a car occupied by 2 people, and "only" double of a train, according to UK government. But if we multiply these data by 2.7 it makes them 2.7 and 5.4 times more pollutant.
Data might differ according to the study, but whatever the source, the result is always the same: the airplane lose.

The following list has been compiled by the Aviation Environmental Federation:

Before becoming a full time traveller, I've been working with energy efficient buildings (Passivhaus standard), and the opinion I elaborated of energetic evaluations, is that it is only a partial viewpoint of the whole story, since it considers only the enrgy consumed, without taking into account the energy needed to produce, dispose and transport the material used, what is technically called LCA (Life Cycle Assessment). I'm expeting railways to require a lot of energy for production of hundreds of kilometers of steel, so taking that into account might change the results. In example modern washing machines are much more efficient than old one (i.e. they use less electricity and water), but if the machine you are using is younger than 15 years, it doesn't make sense from the point of view of LCA to buy a new one unless it gets broken, because you would use more energy for the production and disposal of the new washing machine than the energy you would save with the added efficiency!
So it would be really interesting to analyze LCA studies of the transportation system, not limiting the statistics to the fuel consumption only, but taking into account also the energy used to build, maintain and run railways, airports, highways, etc. having the possibility to give a much more objective opinion. I'm always ready to change my opinion, if there are new valuable information around. Searching over internet I've found only one from 2009: that's unfortunately not enough material to compare and analyze objectively.

Of course you could think of offsetting your emissions, but unfortunately there are not many trustable companies around. Most of them are just scams, either doing nothing, or selling you green credits created by tree plantations that were going to be done anyway; your ecological effort in most cases wouldn't produce an increase in the number of trees planted, but just give an owner to the CO2 that they are going to store.

So am I against flying at all? No, I still consider flying an extremely comfortable and useful way of travelling, to be used with care and when really needed, but it doesn't have to be abused.

I of course would like to fly much more if air travel wasn't so impacting on our environment, and I often wonder if it really makes sense to be so harsh on myself. Most probably there are hidden clean and unlimited sources of energy available, that are hidden just for profit purposes. I still didn't find a definite answer, but at this point my opinion is that if we can't change the rules (that would mean to overcome capitalism) let's fight it from within, with its own market rules: reducing the demand for traditional flights and creating a demand for fast, comfortable and sustainable transport, will move money, effort and investments in finding a sustainable alternative to fossil fuels and airplanes if it doesn't exist already. 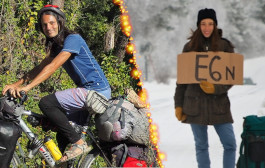