Kumbh Mela in India: Hindu religion and traditions in Haridwar

This year took place in Allahabad, India, the Maha Kumbh Mela, the biggest religious gathering of the world attracting tens of Millions of Hindu pilgrims each time. If you want to know where these millions of people are sleeping, about the "parties" after the prayers, and who are this ash-smeared naked people, keep reading my photostory, written according to my participation at the previous Purna Kumbha Mela in Haridwar.

The words Kumbh and Mela literally come from Pitcher or Sun sign (Kumbh) and fair, gathering (Mela). By attending the Kumbh Mela in Haridwar, it is possible to be purified from sin, bathing in the water of the Holy river, The Ganga (Ganges).

A number of people estimated between 30 and 70 millions, attended the last Kumbh Mela in 2010, arriving from all over India and from abroad. Part of them arrived by foot, after long pilgrimages. 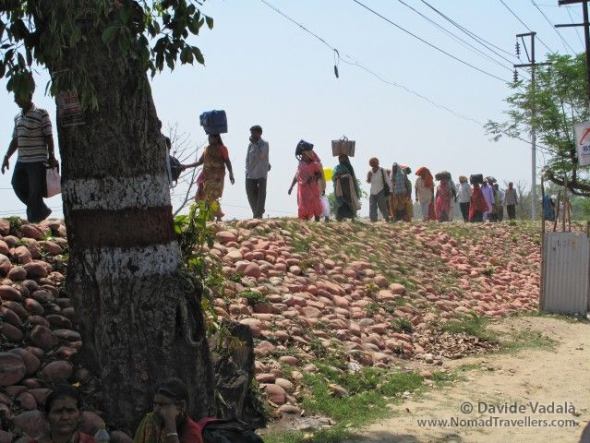 Every single room in the city is taken or extremely overpriced. But the majority of the people is accommodated in a huge camp, a temporary city where it is possible to sleep, and attend the activities.

The accommodation is not luxurious, but 2 squared meters are enough to sleep in the ground one next to the other.

The camp is composed of different big tents, each one assigned to a "Baba" or to a different regional group of India. In the same place where the people sleep, also spiritual meeting are held.

In the evening taking a walk in the camp is like having an overview of the Indian folklore: traditional dances and local instruments coming from every region, are shown to entertain the pilgrims.

When the dance is over, it is possible to join one of the many dreadlocked men, always friendly and welcoming. Sadhus are used to smoke cannabis from a pipe.

Despite the Ganges is ranked among the top 5 most polluted rivers in the world, everybody is willing to dip in the Holy water to cleanse sins.

A friendly Sadhu bathing in the Ganga. Sadhus are ascetic people leaving by donation, that left behind every material possession, to live in caves, forests and temples, meditating and looking for the Liberation as a final goal.

There are some particular days during the Kumbh Mela, called "Main bathing days" in wich an incredible amount of people gather at the same time to bath in the river. These are chose according to astrological calculations, related with the positions of Sun, Jupiter, Moon and the Zodiac.

This is how it looks like the river bank in Haridwar during one of the main bathing dates. There are teams of people controlling and directing the crowds to give the possibility to everybody to dip in the water.

An indian believer, rigourously dressed, is performing a ritual with the holy water of the Ganges in Haridwar.

Men instead are allowed to have a more "informal" outfit.

Staying on the banks of the Ganga river, It is possible to assist at interesting rituals, unifying different generations of the same family.

Holy men, can be quite interesting characters, like this Sadhu with distinctive dreadlocks, during his ritual in the water of the Ganges.

An offer on the banks of the river Ganga, Kumbh Mela, Haridwar.

Despite Gurus are renouncing to everything to follow spirituality, it is still common for them to try to attract followers using poster and commercials.

At the end of the event, a big procession of Sadhus is taking place in the roads. Packed trucks, colorful umbrellas and long beards are the key elements of an incredible scenario.

A Sadhu absorbed in an unexpected dance is entertaining people along the road.

People try to catch the attention of the Sadhus passing by during the procession.

Small trucks are loaded at their maximum, to transport the crowd of holy men.

People are climbing even trees to find a spot to assist at the parade.

The "alternative" look of some Sadhus, sometimes is going so far that they wrap themselves in leopard-cloth, wearing Jhon Lennon's glasses.

Even elephants are used as a mean of transportation during the procession.

A Naga Sanyasis, an ash-smeared sadhu wearing no clothes if not for his accessories.

If you enjoyed this photostory and you want to see more pictures from Kumbh Mela in Haridwar, you can check the full album at this link